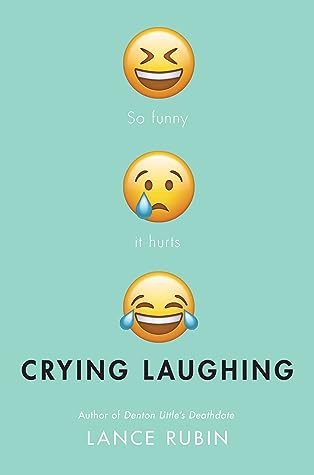 Winnie Friedman has been waiting for the world to catch on to what she already knows: she’s hilarious.

It might be a long wait, though. After bombing a stand-up set at her own bat mitzvah, Winnie has kept her jokes to herself. Well, to herself and her dad, a former comedian and her inspiration.

Then, on the second day of tenth grade, the funniest guy in school actually laughs at a comment she makes in the lunch line and asks her to join the improv troupe. Maybe he’s even . . . flirting?

Just when Winnie’s ready to say yes to comedy again, her father reveals that he’s been diagnosed with ALS. That is . . . not funny. Her dad’s still making jokes, though, which feels like a good thing. And Winnie’s prepared to be his straight man if that’s what he wants. But is it what he needs?

The title Laughing Crying is actually super appropriate, as that’s exactly what I did. I loved Winnie so much, and she’s truly hilarious. But oh man, about the halfway point, I literally started crying reading this. (A good cry!)

Winnie Friedman is the exact kind of girl I would’ve loved growing up, because she’s everything I’m not: funny, smart, and brave. It really does take courage to do stand up at a bat mitzvah. (Even if she did totally blow it…)

Another thing I love about her is her love of comedy. Like, smart comedy, at that. She even mentions early on in the book that sure, fart jokes can be funny, but there’s so much more nuance to it! Her admiration of her father is so pure, as well. That’s why when he finally talks about his diagnosis, it’s so painful.

Winnie’s relationships with Asmaa and Leili are absolutely wonderful, as well. This is how real teenage friendships are! But ohhhhhh, Evan. He’s the exact boy girls date for their first ever relationship, and it always turns out horrible.

One of my top reads for this year, Rubin handles a serious disease with grace and humor. I give Laughing Crying 5 out of 5 frozen yogurts.